Mad as Hell: How the Tea Party Movement Is Fundamentally Remaking Our Two-Party System 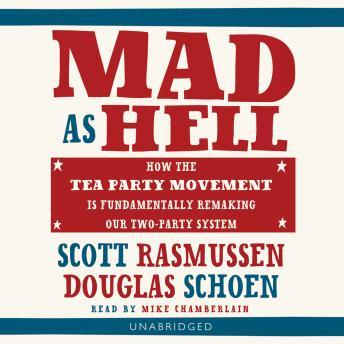 Today’s raucous revolt against Washington and Wall Street is a classic populist uprising. Now two respected political pollsters show what it means for the future of American politics.
The riotous tea parties and town hall meetings of last summer seemingly took everyone by surprise. They shouldn’t have. Populist movements have always arisen in times of economic hardship. Here, Scott Rasmussen and Doug Schoen explore the heart of the uprising that has thrown American politics into turmoil.
In the past, populist movements have taken root either on the right or on the left. Today’s revolt has two wings: a left wing that wants universal health care and a right wing that wants to reduce the power of governmental influence in our lives. Both are hostile to the Washington political class, Wall Street, and the mainstream media—all of which they consider out of touch with the concerns of “real” Americans. The difference is that left-wing populists are effectively represented by Barack Obama and congressional Democrats, while right-wing populists are chiefly represented by Fox News and Rush Limbaugh—a potentially more powerful political force.
Many have failed to comprehend the new populism, dismissing it as marginal and extreme. But it is reshaping American politics, whether politicians and elite journalists like it or not. The Tea Party movement is not a flash in the pan. Nor is it a movement of racist rednecks and ignorant boobs, as some have crudely suggested. It is an authentic grassroots movement of concerned American citizens demanding to be heard by an out-of-touch political establishment. Their concerns are real, their issues legitimate. The new populism is here to stay, and it has already changed our politics for the better.
Mad as Hell is an authoritative guide to the new populism, featuring proprietary polling data, political analysis, results from online focus groups, and more. It is a must-read for anyone interested in American electoral politics.

Mad as Hell: How the Tea Party Movement Is Fundamentally Remaking Our Two-Party System

This title is due for release on October 22, 2010
We'll send you an email as soon as it is available!