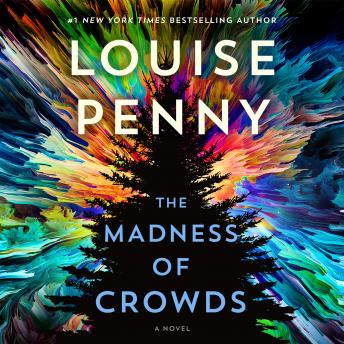 The Madness of Crowds: A Novel

'Robert Bathurst's narration is calm, collected, and earnest, reflecting the blend of emotion and professionalism that Gamache embodies as an investigator. It's perfect for listeners seeking both captivating intrigue and insightful reflection.' - BookPage

Time and again, as the New Year approaches, that charge is leveled against Armand Gamache.

While the residents of the Québec village of Three Pines take advantage of the deep snow to ski and toboggan, to drink hot chocolate in the bistro and share meals together, the Chief Inspector finds his holiday with his family interrupted by a simple request.

He’s asked to provide security for what promises to be a non-event. A visiting Professor of Statistics will be giving a lecture at the nearby university.

While he is perplexed as to why the head of homicide for the Sûreté du Québec would be assigned this task, it sounds easy enough. That is until Gamache starts looking into Professor Abigail Robinson and discovers an agenda so repulsive he begs the university to cancel the lecture.

They refuse, citing academic freedom, and accuse Gamache of censorship and intellectual cowardice. Before long, Professor Robinson’s views start seeping into conversations. Spreading and infecting. So that truth and fact, reality and delusion are so confused it’s near impossible to tell them apart.

Abigail Robinson promises that, if they follow her, ça va bien aller. All will be well. But not, Gamache and his team know, for everyone.

When a murder is committed it falls to Armand Gamache, his second-in-command Jean-Guy Beauvoir, and their team to investigate the crime as well as this extraordinary popular delusion.

And the madness of crowds.

Another Louise Penny winner! Very clever, but chilling, take on one wickedly possible after effect of the Covid pandemic. Gamache’s integrity withstands a very challenging situation. What next???

These books are becoming tedious. I liked them in the beginning, but nothing changes. and the jokes make me weary. the food in Clara's hair. Ruth's rudeness, alcoholism and petty stealing. The duck that says fuck. the murders always happening in this tiny village. Maybe I've just read too many of them. The ruminations and moralizing, and philosophical quotations that get repeated again and again in the chapters and in each book. And the brutality of the crimes is disturbing; she seems to be making a statement in her books about the sick, evil nature of humanity. This one was predictable. I knew where it was headed most of the way through. Someone said "phoned it in" and that felt apt.

Honestly…. I think Louise was phoning it in this time. I have loved and really enjoyed all of her books and consider myself a fan of her work….. except this one. Maybe she can’t do two different projects at the same time, Maybe writing a book with Hilary and writing this book at the same time was too much for her…. I hope she considers focusing on only “Three Pines” next year. Really miss her real work….. and the real mysteries of “Three Pines”!

I enjoy this series and love the characters. This book was a challenge, it took turns and twists, that were not expected. All in all a good read