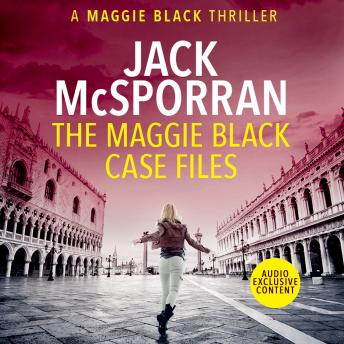 This collection features Maggie Black's most notorious cases as well as exclusive content from author Jack McSporran. Vendetta (Book 1) – When a British covert intelligence agency learns of an impending drug deal between the Venetian mafia and one of the UK’s most notorious importers, agent Maggie Black is sent to stop it. Under the alias of an American drug lord, Maggie must infiltrate the crime family and stop their product from reaching British soil. A feat that gets more complicated when her colleague and old flame Leon is sent along with her. The Witness (Book 2) – When the sole witness to a foreign dignitary’s murder is kidnapped, secret agent Maggie Black is sent to the United States to save her. Already shaken by unexpected personal news, Maggie’s work gets even more complicated when she learns the witness is a twelve-year-old girl being held inside the Russian consulate. Using her specialized skill set, Maggie must find a way to return the girl to the safe hands of her British colleagues. The Defector (Book 3) – In the aftermath of a horrific terrorist attack in London, secret agent Maggie Black is sent to Paris to stop the culprits from striking again. Struggling with grief from a recent personal loss, Maggie's mission is about more than serving her country. She wants revenge against the home-grown terrorists who shook London to its core. With the help of a certain ex-agent turned rogue Scotsman, Maggie must race against time before Paris and its people meet the same fate.