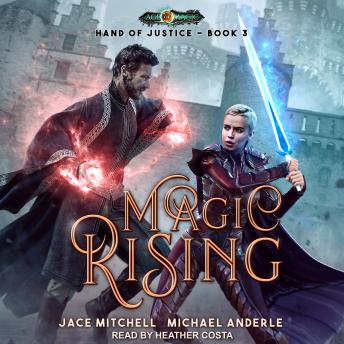 #3 of Hand Of Justice

With magical powers to complement her formidable sword skills, Riley Trident heads to Sidnie with the fates of her best friend and an entire kingdom in her hands.

The practice of magic thrives in Sidnie, but Hemmons' capabilities are far beyond those of even its most accomplished citizens. He shuts down their schools and opens his own, training warrior mages in round the clock shifts to achieve his ultimate goal: Sacking New Perth and conquering the nation.

Sensing the proximity of Riley's magic, Hemmons steps up his efforts to find her. If the rising body count won't crush any hopes of a resistance and lure her out of the shadows, then perhaps Mason's agonizing death will.

Will Riley's enhanced powers swing the battle against Hemmons, or will he, at long last, acquire the crown jewel he's long coveted and rule the continent?