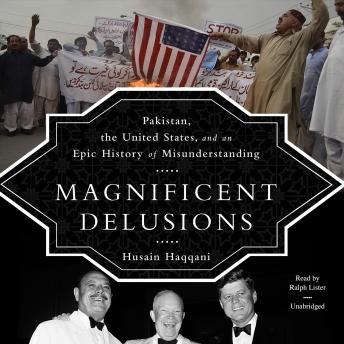 Magnificent Delusions: Pakistan, the United States, and an Epic History of Misunderstanding

A character-drivenhistory that describes the bizarrely ill-suited alliance between America andPakistan, written by a uniquely insightful participant: Pakistan's formerambassador to the US
The relationship between America and Pakistan is based onmutual incomprehension, and always has been. Pakistan-to American eyes-has gonefrom being a stabilizing friend to an essential military ally to a seedbed ofterror. America-to Pakistani eyes-has been a guarantee of security, a coldlydistant scold, an enthusiastic military supplier and ally, and now a threat tonational security and a source of humiliation. In their sixty-five yearrelationship, one country has become a global superpower, the other perilouslyclose to a failed state-perhaps one of the most dangerous places in the world.
Husain Haqqani has a unique insight into Pakistan, hishomeland, and America, where he was the Pakistani ambassador and is now aprofessor at Boston University. His life has mapped the relationship ofPakistan and America, and he has found himself often close to the heart of it-sometimes in very confrontational circumstances, even under house arrest-whichhas allowed him to write the story of the two countries' turbulent affair, herememorably laid bare.

Magnificent Delusions: Pakistan, the United States, and an Epic History of Misunderstanding

This title is due for release on May 11, 2013
We'll send you an email as soon as it is available!