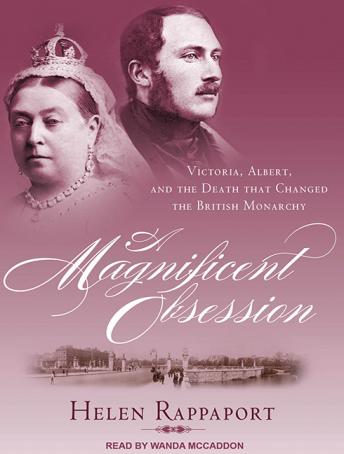 A Magnificent Obsession: Victoria, Albert, and the Death That Changed the British Monarchy

After the untimely death of Prince Albert, the Queen and her nation were plunged into a state of grief so profound that this one event would dramatically alter the shape of the British monarchy. For Britain had not just lost a prince: during his twenty year marriage to Queen Victoria, Prince Albert had increasingly performed the function of King in all but name. The outpouring of grief after Albert's death was so extreme, that its like would not be seen again until the death of Princess Diana one hundred and thirty-six years later.Drawing on many letters, diaries and memoirs from the Royal Archives and other neglected sources, as well as the newspapers of the day, Helen Rappaport offers a new perspective on this compelling historical psychodrama-the crucial final months of the prince's life and the first long, dark ten years of the Queen's retreat from public view. She draws a portrait of a queen obsessed with her husband and-after his death-with his enduring place in history. Magnificent Obsession also sheds new light on the true nature of the prince's chronic physical condition, overturning for good the one hundred and fifty-year-old myth that he died of typhoid fever.

Magnificent Obsession: Victoria, Albert, and the Death That Changed the British Monarchy

This title is due for release on April 9, 2012
We'll send you an email as soon as it is available!