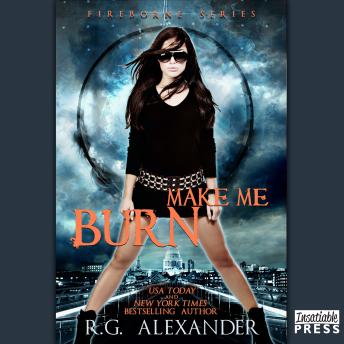 From New York Times and USA Today Bestselling Author R.G. Alexander. One wrong move and it all goes up in flames. Fireborne, Book 2. Aziza Jane Stewart is the last of the Fireborne, and so far it's been nothing but a curse, destroying her family and putting everyone she loves in danger. Now she's on a quest to find her brother's portion of the power that flows in her veins and track down the murdering Jiniyr who are a threat to her loved ones. She and her Enforcer lover Brandon are officially 'in a relationship', but she's still torn between two men who both set her on fire. Brandon's duties are driving a wedge between them, and her need to protect her Jinn guardian isn't helping. Exiled and stripped of his powers, Ram is focused on satisfying his darkest urges...and tempting her to come along for the ride. When Aziza discovers Brandon has been keeping news of ritualistic murders from her and the evidence is pointing at Ram, all bets are off. It's time to find her own answers, embrace what's inside her and make her own rules, damn the consequences. Warning: Explicit content, and even more danger and heavy drinking than book one. Fetish clubs and role-play, whips and chains, voyeurism and exhibitionism. More inappropriate use of supernatural powers for deviant activities. In other words, burning down the house.