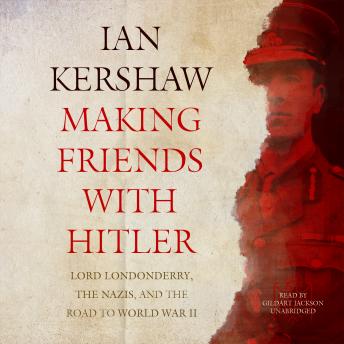 Making Friends with Hitler: Lord Londonderry, the Nazis, and the Road to World War II

Charles Stewart Henry Vane-Tempest-Stewart, the 7th Marquess of Londonderry, was born to power and command. Scion of one of Britain's most aristocratic families, cousin of Churchill and confidant of the king, owner of vast coal fields and landed estates, married to the doyenne of London's social scene, Londonderry was an ornament to his class, the 0.1 percent of the population who still owned 30 percent of England's wealth as late as 1930. But history has not been kind to "Charley," as the king called him, because, in his own words, he "backed the wrong horse," and a very dark horse indeed: Adolf Hitler and his Nazi Party. Londonderry was hardly the only British aristocrat to do so, but he was the only Cabinet member to do so, and it ruined him. In a final irony, his grand London house was bombed by the German Luftwaffe in the blitz.

Ian Kershaw is not out to rehabilitate Lord Londonderry but to understand him and to expose why he was made a scapegoat for views that were much more widely held than anyone now likes to think. H. L. Mencken famously said that "for every complex problem, there is a solution that is simple, neat, and wrong." The conventional explanation of the coming of World War II is a simple story of the West's craven appeasement of Hitler in the face of his bullying. Through the story of how Lord Londonderry came to be mixed up with the Nazis and how it all went horribly wrong for him, Ian Kershaw shows us that behind the familiar cartoon is a much more complicated and interesting reality, full of miscalculations on both sides, miscalculations that proved to be among the most fateful in history.

Making Friends with Hitler: Lord Londonderry, the Nazis, and the Road to World War II