Making Haste from Babylon: The Mayflower Pilgrims and Their World: A New History 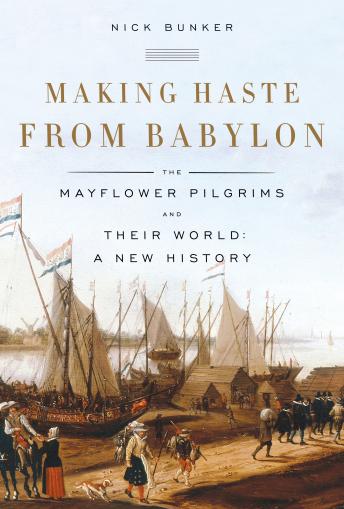 At the end of 1618, a blazing green star soared across the night sky over the northern hemisphere. From the Philippines to the Arctic, the comet became a sensation and a symbol, a warning of doom or a promise of salvation. Two years later, as the Pilgrims prepared to sail across the Atlantic on board the Mayflower, the atmosphere remained charged with fear and expectation. Men and women readied themselves for war, pestilence, or divine retribution. Against this background, and amid deep economic depression, the Pilgrims conceived their enterprise of exile.

Within a decade, despite crisis and catastrophe, they built a thriving settlement at New Plymouth, based on beaver fur, corn, and cattle. In doing so, they laid the foundations for Massachusetts, New England, and a new nation. Using a wealth of new evidence from landscape, archaeology, and hundreds of overlooked or neglected documents, Nick Bunker gives a vivid and strikingly original account of the Mayflower project and the first decade of the Plymouth Colony. From mercantile London and the rural England of Queen Elizabeth I and King James I to the mountains and rivers of Maine, he weaves a rich narrative that combines religion, politics, money, science, and the sea.

The Pilgrims were entrepreneurs as well as evangelicals, political radicals as well as Christian idealists. Making Haste from Babylon tells their story in unrivaled depth, from their roots in religious conflict and village strife at home to their final creation of a permanent foothold in America.

Making Haste from Babylon: The Mayflower Pilgrims and Their World: A New History