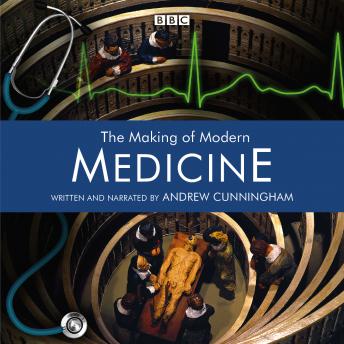 The Making Of Modern Medicine

This major new Radio 4 series charts the development of Western medicine and healing from the ancient Greeks to the pioneering organ transplant operations of the 20th Century and beyond. ‘The Making of Modern Medicine’ covers over 2000 years of medical history and draws on a vast range of original sources from diaries, medical journals and stage satires to shed light on the experiences of physicians, surgeons, nurses and patients. From classical beliefs about illness that would dominate medical thinking for centuries, through to the rise of the great hospitals and the work of the Renaissance anatomists, this fascinating and entertaining series reveals how, in the early 19th Century, modern scientific medicine was born out of a medical ‘Big Bang’ erupting from the white heat of the French Revolution, which would lead to clinical medicine as we know it today. Written and presented by Andrew Cunningham, an authority on social and scientific medical history, it includes a wide variety of highly illustrative extracts read by acclaimed actors including Tamsin Greig, Annette Badland, David Rintoul and Peter Capaldi. Whether you’re interested in what it was like to be ill in earlier times, the emergence of women in medicine, the advent of the stethoscope, or the development of antibiotic treatment, this series offers an entertaining and thought-provoking insight into these and many other medical issues.