Making Rounds with Oscar: The Extraordinary Gift of an Ordinary Cat 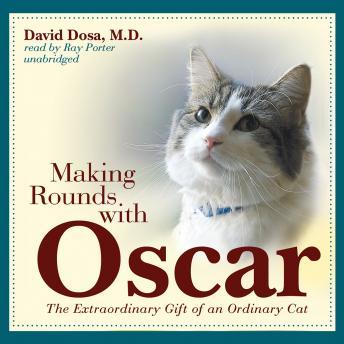 An otherwise ordinary cat—he’d sooner give you his back or a sideways glance than curl up on your lap—Oscar has the uncanny ability to predict when people are about to die. Adopted by staff members at Steere House nursing home when he was a kitten, the three-year-old tabby has presided over the deaths of more than twenty-five nursing home residents thus far. His mere presence at the bedside is viewed by physicians and nursing-home staff as an almost absolute indicator of impending death, considered a blessing because it allows staff members to notify families that the end is near and because he provides companionship to those who would otherwise have died alone.

Dr. Dosa uses Oscar and the stories of several patients to examine end-of-life care as it exists today for the family and caregivers of dementia and Alzheimer’s patients. Heartfelt, inspiring, and sometimes even funny, Making Rounds with Oscar allows listeners into a world that is often misunderstood and rarely seen from the outside.

Making Rounds with Oscar: The Extraordinary Gift of an Ordinary Cat