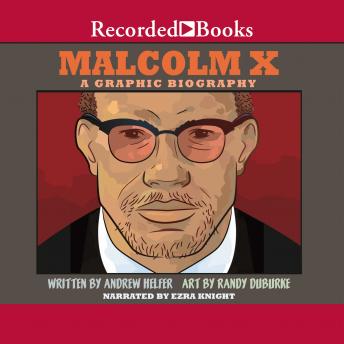 Malcolm X, born Malcolm Little, lived a short, often violent life. This story frames Malcolm's death with his upbringing and the racial and political struggles that defined his adult life. Malcolm was struck by racial injustice at a young age. His father was murdered-though police ruled it a suicide-for his involvement in civil rights movements. He graduated from junior high at the top of his class, but his dreams were crushed when his teacher told him a black boy could never become a lawyer. Later, he joined the Nation of Islam and preached for civil rights-but this made him a target of the United States government and of ruthless assassins. This audio companion for the graphic novel Malcolm X: A Graphic Biography allows readers to follow along with the book's evocative drawings by Randy DuBurke. Listeners will gain a new perspective on the activist from this dynamic biography. 'Far from reverential, the account includes chapters on Malcolm X's life as a hustler and his own disturbing racism ... evokes powerful visual drama and brings the big issues close in a way that is sure to interest YAs for biography assignments as well as discussion of the issues.'-Booklist

This title is due for release on February 15, 2013
We'll send you an email as soon as it is available!