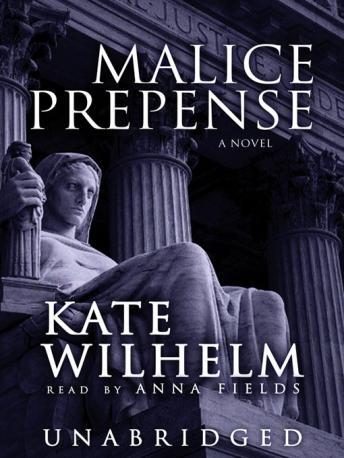 Forget about Grisham, Turow, and all those other scribbling ex-lawyers. The best writer of legal mysteries working today is Kate Wilhelm of Eugene, Oregon.
When he was a kid, Teddy Wendover had an accident that left him stunted at the mental age of eight. Physically, he's six-foot-two and twenty-eight years old, but he acts and thinks just like a little boy. Could this big little boy be a killer?
Someone has murdered one of Oregon's congressmen, and it doesn't seem to be a coincidence that this politician led the field trip during which Teddy's accident occurred almost twenty years ago. Nor does it seem to be coincidental that the killer left rocks strewn about the murder site, rocks just like the ones Teddy plays with. And the only thing that's certain is that the person who cast the first of these stones is not without sin.
Malice Prepense is the most complicated and most engrossing case yet for Barbara Holloway, the dynamic star of Death Qualified and The Best Defense.