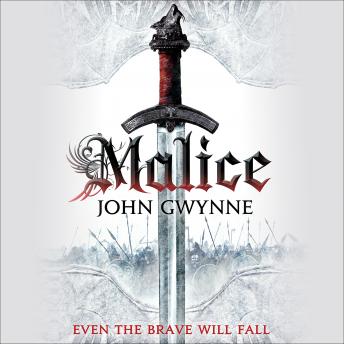 The first book in acclaimed epic fantasy author John Gwynne's Faithful and Fallen series, Malice is a tale of blind greed, ambition, and betrayal set in a world where ancient monsters are reawakening -- and a war to end all wars is about to begin.

The world is broken. . .and it can never be made whole again.

Corban wants nothing more than to be a warrior under King Brenin's rule -- to protect and serve. But that day will come all too soon. And the price he pays will be in blood.

Evnis has sacrificed -- too much it seems. But what he wants -- the power to rule -- will soon be in his grasp. And nothing will stop him once he has started on his path.

Veradis is the newest member of the warband for the High Prince, Nathair. He is one of the most skilled swordsman to come out of his homeland, yet he is always under the shadow of his older brother.

Nathair has ideas -- and a lot of plans. Many of them don't involve his father, the High King Aquilus. Nor does he agree with his father's idea to summon his fellow kings to council.

The Banished Lands has a violent past where armies of men and giants clashed in battle, the earth running dark with their heartsblood. Now, the stones weep red and giant wyrms stir, and those who can still read the signs see a danger far worse than all that has come before. . .