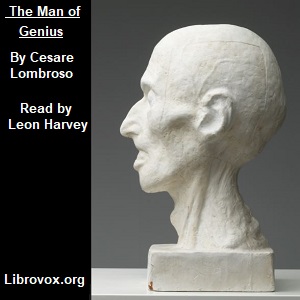 The Man of Genius

Famous criminologist, anthropologist, and psychiatrist, Dr Lombroso, investigated the memetic anecdotal belief that genius is associated with degenerative symptoms, or may even be a version of insanity, and presented his findings as a fascinating and controversial theory that the creative and imaginative celebrities throughout history have also displayed what he termed as "atavistic" symptoms, or defects resembling what is commonly seen in the unwell. Citations of evidence are drawn from a rich variety of references sources, including autopsy reports of brains and skulls, biographical data, the influence of environmental and seasonal changes on inventiveness, and even from the records of thousands of admittance into prisons and asylums of France and Italy. This book can be considered as a sort of sequel to his better known and also highly controversial theories about criminality associated with physical manifestations, often categorised as "psuedoscience". However, it should be noted that although his claims are factual and verifiable, his choice of selective evidence and the absence of a control group should be considered when reading the book. - Summary by Leon Harvey

This title is due for release on July 6, 2020
We'll send you an email as soon as it is available!