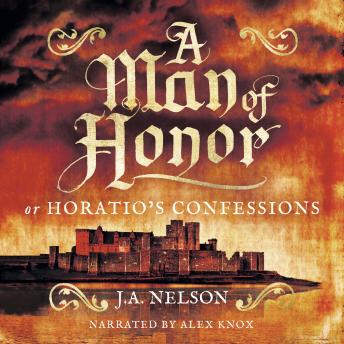 A Man of Honor, or Horatio's Confessions: A Historical Adventure Story

Written By: J. A. Nelson

Rated 4.4 out of 5 stars by IndieReader Reviews. 'Nelson has developed a timeless story.... Like a train, A MAN OF HONOR's narrative builds speed and takes off into an often gripping adventure of love, war, and discovery.'

A Man of Honor tells the fictional tale of how one man’s oath gave birth to the legend of Hamlet.

How far would you go to keep a deathbed promise? Surrounded by the bodies of slain monarchs, a dying prince extracts a promise from his friend, Horatio: 'Tell my story.'

Rival kings of warring nations strive to lay claim to the throne, now vacant, but what will happen to the people who live there, at Helsingør's Krogen Castle? How will Horatio preserve his honor and the prince's legacy while surviving this murderous kingdom and the men who would rule it?

Despite the odds and threats against him, Horatio persists, weaving the story of his dear friend into the fabric of one of their oldest and most revered medieval texts.

But when a nefarious Spaniard thwarts his plans, Horatio must once again risk everything to fulfill his oath.

With the help of some unexpected allies in the form of Margrete, a courageous lady-in-waiting, and Lanier, a disgraced French nobleman, Horatio undertakes this perilous quest that will lead him on a journey none of them could have ever predicted, to a place none of them ever thought they would see.

And after their hard-fought journey will it all be for naught? Will Hamlet's glory be Horatio's downfall?

Man of Honor, or Horatio's Confessions: A Historical Adventure Story

This title is due for release on March 1, 2020
We'll send you an email as soon as it is available!