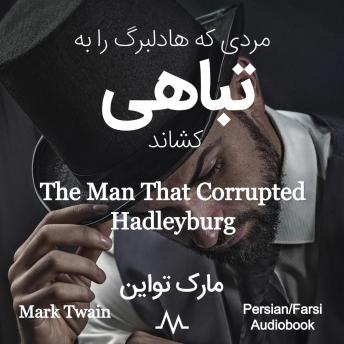 The Man That Corrupted Hadleyburg

The Man That Corrupted Hadleyburg is a short story by Mark Twain and was published in 1899. It tells the story of the destruction of a small town (known as Hadleyburg), which is known far and wide as an honest and moral community. The people of the town enjoy the reputation of being honest. They isolated themselves and their babies from outsiders; when their children are still babies, keeping them sheltered from any kind of temptation.
However, a mysterious stranger - who has a grudge against the town during the past year for an unnamed, unrequited offence – decides to get his revenge by corrupting the town and proves that its nineteen most well-respected members are immoral and dishonest. He gives a sack - which contains $40,000 gold - to the bank cashier and leaves him a note that explains how the bank cashier should spend it.
This version of the book is translated by Farideh Eizadi to Persian (Farsi) and narrated by Bahram Sarvarinejad. The Persian version of The Man That Corrupted Hadleyburg’s audiobook is published by Maktub worldwide.