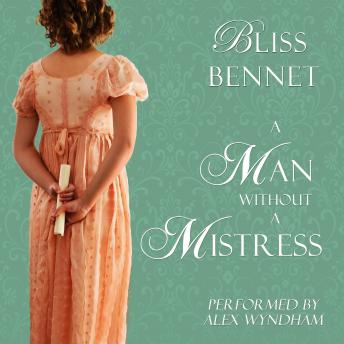 A Man without a Mistress

'savvy, sensual, and engrossing.' —USA Today Happy Every After

A man determined to atone for the past

For seven long years, Sir Peregrine Sayre has tried to assuage his guilt over the horrifying events of his twenty-first birthday by immersing himself in political work—and by avoiding all entanglements with the ladies of the ton. But when his mentor sends him on a quest to track down purportedly penitent prostitutes, the events of his less-than-innocent past threaten not only his own political career, but the life of a vexatious viscount’s daughter as well.

A woman who will risk anything for the future

Raised to be a political wife, but denied the opportunity by her father’s untimely death, Sibilla Pennington has little desire to wed as soon as her period of mourning is over. Why should she have to marry just so her elder brothers might be free of her hoydenish ways and her blazingly angry grief? To delay their plans, Sibilla vows only to accept a betrothal with a man as politically astute as was her father—and, in retaliation for her brothers’ amorous peccadillos, only one who has never kept a mistress. Surely there is no such man in all of London.

When Sibilla’s attempt to free a reformed maidservant from the clutches of a former procurer throw her into the midst of Per’s penitent search, she finds herself inextricably drawn to the cool, reserved baronet. But as the search grows ever more dangerous, Sibilla’s penchant for risk taking cannot help but remind Per of the shames he’s spent years trying to outrun. Can Per continue to hide the guilt and ghosts of his past without endangering his chance at a passionate future with Sibilla?

Man without a Mistress

This title is due for release on January 22, 2021
We'll send you an email as soon as it is available!