The Management of Savagery: How America's National Security State Fueled the Rise of Al Qaeda, ISIS, and Donald Trump 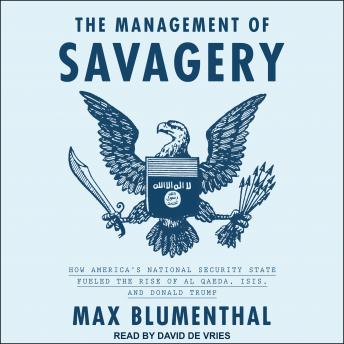 The rise of international jihad and Western ultra-nationalism

In the Management of Savagery, Max Blumenthal excavates the real story behind America's dealings with the world and shows how the extremist forces that now threaten peace across the globe are the inevitable flowering of America's imperial designs.

Washington's secret funding of the mujahedin provoked the Russian invasion of Afghanistan in 1979. With guns and money, the United States has ever since sustained the extremists, including Osama Bin Laden, who have become its enemies. The Pentagon has trained and armed jihadist elements in Afghanistan, Syria, and Libya; it has launched military interventions to change regimes in the Middle East. In doing so, it created fertile ground for the Islamic State and brought foreign conflicts home to American soil.

These failed wars abroad have made the United States more vulnerable to both terrorism as well as native ultra-nationalism. The Trump presidency is the inevitable consequence of neoconservative imperialism in the post-Cold War age. Trump's dealings in the Middle East are likely only to exacerbate the situation.