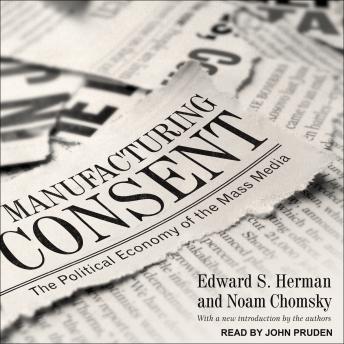 Manufacturing Consent: The Political Economy of the Mass Media

In this pathbreaking work, now with a new introduction, Edward S. Herman and Noam Chomsky show that, contrary to the usual image of the news media as cantankerous, obstinate, and ubiquitous in their search for truth and defense of justice, in their actual practice they defend the economic, social, and political agendas of the privileged groups that dominate domestic society, the state, and the global order.

Based on a series of case studies-including the media's dichotomous treatment of 'worthy' versus 'unworthy' victims, 'legitimizing' and 'meaningless' Third World elections, and devastating critiques of media coverage of the U.S. wars against Indochina-Herman and Chomsky draw on decades of criticism and research to propose a Propaganda Model to explain the media's behavior and performance. Their new introduction updates the Propaganda Model and the earlier case studies, and it discusses several other applications.

While the book came highly recommended, it wasn’t as good as I’d hoped. It was used in a college course years ago and had a ton of information and statistics on numerous historical events. The facts are there, the story has much detail, but that’s where it fell short to me. The narration of all the details makes it harder to follow. I wanted to use a notepad to write down the names and numbers mentioned throughout the book. One of those books you’d use a highlighter throughout to see key facts. While initially, the narration really takes you in, it later gnaws at you and makes it more difficult to listen to. Probably was a great book, for a great class, in a previous period, but for now, not what I’d recommend.