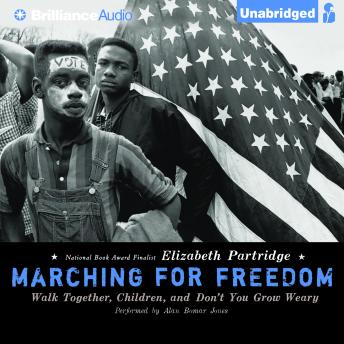 Marching for Freedom: Walk Together, Children, and Don't You Grow Weary

The eerie silence was broken only by the sound of scuffling feet as marchers approached the Edmund Pettus Bridge in Selma, Alabama. The mood was sober. Hundreds of men, women, and children had been protesting in Selma for weeks to win black Americans the right to vote. They'd been threatened. Been arrested. Jailed. This march was likely to end in violence, yet they went anyway. But when state troopers attacked with billy clubs and tear gas, the brute force was a shock. Many were injured, including children.

But not even Bloody Sunday, as March 7 came to be known, was enough to deter the marchers. Led by Dr. Martin Luther King Jr., they were committed to the voting rights movement despite the risks. Not even the youngest protestors gave up, and their defiance and courage were inspiring. Without them the struggle in Selma - which culminated in a five-day march to Montgomery - might have failed.

Marching for Freedom tells the story of how ordinary kids helped change history. Award-winning author Elizabeth Partridge explores the events at Selma from their point of view, drawing on vivid recollections of some of those who marched as children. Dramatic photographs capture the danger and spirit in Selma during the turbulent spring of 1965 and offer a stunning visual narrative to the audio.

Marching for Freedom: Walk Together, Children, and Don't You Grow Weary