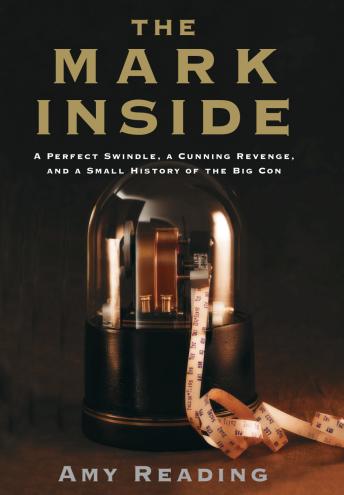 The Mark Inside: A Perfect Swindle, a Cunning Revenge, and a Small History of the Big Con

In 1919, Texas rancher J. Frank Norfleet lost everything he had in a stock market swindle. He did what many other marks did—he went home, borrowed more money from his family, and returned for another round of swindling.

Only after he lost that second fortune did he reclaim control of his story. Instead of crawling back home in shame, he vowed to hunt down the five men who had conned him. Armed with a revolver and a suitcase full of disguises, Norfleet crisscrossed the country from Texas to Florida to California to Colorado, posing as a country hick and allowing himself to be ensnared by confidence men again and again to gather evidence on his enemies. Within four years, Frank Norfleet had become nationally famous for his quest to out-con the con men.

Through Norfleet’s ingenious reverse-swindle, Amy Reading reveals the mechanics behind the scenes of the big con—a piece of performance art targeted to the most vulnerable points of human nature. Reading shows how the big con has been woven throughout U.S. history. From the colonies to the railroads and the Chicago Board of Trade, America has always been a speculative enterprise, and bunco men and bankers alike have always understood that the common man was perfectly willing to engage in minor fraud to get a piece of the expanding stock market—a trait that made him infinitely gullible.

Amy Reading’s fascinating account of con artistry in America and Frank Norfleet’s wild caper invites you into the crooked history of a nation on the hustle, constantly feeding the hunger and the hope of the mark inside.

Mark Inside: A Perfect Swindle, a Cunning Revenge, and a Small History of the Big Con