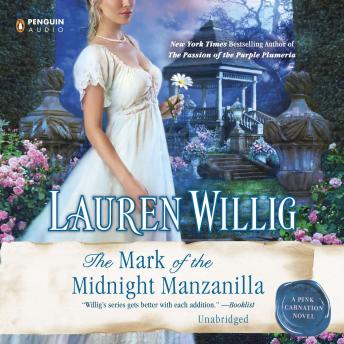 The Mark of the Midnight Manzanilla

In the latest Pink Carnation novel from national bestselling author Lauren Willig, rumors spreading among the ton turn deadly as a young couple unites to solve a mystery....

In October of 1806, the Little Season is in full swing, and Sally Fitzhugh has had enough of the endless parties and balls. With a rampant vampire craze sparked by the novel The Convent of Orsino, it seems no one can speak of anything else. But when Sally hears a rumor that the reclusive Duke of Belliston is an actual vampire, she cannot resist the challenge of proving such nonsense false. At a ball in Belliston Square, she ventures across the gardens and encounters the mysterious Duke.

Lucien, Duke of Belliston, is well versed in the trouble gossip can bring. He’s returned home to dispel the rumors of scandal surrounding his parents’ deaths, which hint at everything from treason to dark sorcery. While he searches for the truth, he welcomes his fearsome reputation—until a woman is found dead in Richmond. Her blood drained from her throat.

Lucien and Sally join forces to stop the so-called vampire from killing again. Someone managed to get away with killing the last Duke of Belliston. But they won’t kill this duke—not if Sally has anything to say about it.