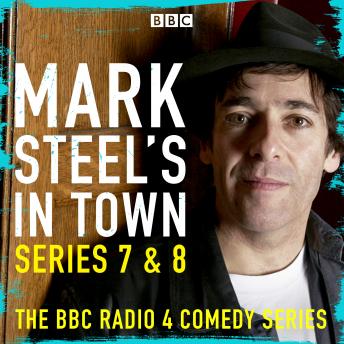 In each episode of this award-winning BBC Radio 4 series, comedian Mark Steel visits a UK town and researches its history, heritage and culture, after which he performs a bespoke evening of comedy for the local residents.

Mark’s destinations in series 7 and 8 are: Stockport, Colchester, Hebden Bridge, Kingston upon Thames, Lynton and Lynmouth, Gibraltar, Bedford, Matlock and Matlock Bath, Inverness, Portishead, Hull and Ventnor on the Isle of Wight. This collection includes bonus special extended episodes from Gibraltar and Ventnor.

In 2010 Mark Steel's in Town won a Silver Award for 'Best Comedy' in the Sony Radio Academy Awards, and in 2012 it won the Gold Award in the same category. Also in 2010 it won the Writers' Guild of Great Britain Award for 'Best Radio Comedy / Light Entertainment'. The series was voted 'Best Radio Entertainment Show' in the Comedy.co.uk Awards held by the British Comedy Guide in the 2012 and 2015 awards.