A Marquis for Marianne: A Sweet Regency Romance 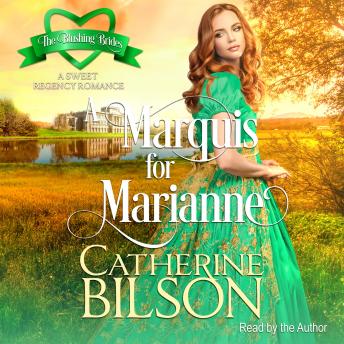 Relieved widow Marianne has vowed never to let a man have power over her again after surviving a hellish marriage. Determined to maintain her independence, she refuses to let her scheming nephew turn her into an unpaid governess for his daughters and takes refuge with Ellen, Countess of Havers, at the countess’s first house party.

Alexander Rotherhithe, Marquis of Glenkellie, never stopped loving Marianne despite the way she broke his heart by marrying another man. Finding her available again and setting her traps for more unwary young men, his anger flares - until he finds out the truth about Marianne’s marriage.​

Can Alexander accept the truth that she never intended to betray him - and can Marianne look past her fear and dare to love again?


A Marquis for Marianne is the second book in the Blushing Brides series after An Earl for Ellen, but can be enjoyed as a standalone novel.

This title is due for release on January 2, 2021
We'll send you an email as soon as it is available!