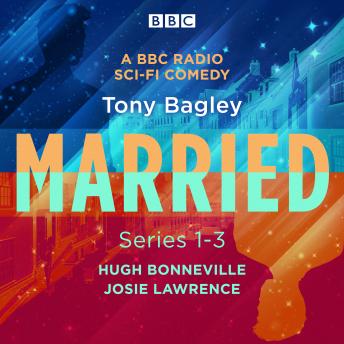 Cantankerous bachelor Robin Lightfoot is happily single – until one morning he awakes to discover he’s married with two children. And he has two half-brothers... both called Ian. Is it a nightmare, a practical joke or something more sinister?

Robin gradually realises that he’s in an alternate universe, where the Lib Dems are in power, the Dimbleby brothers are sports commentators and alcohol is a class-A drug. He discovers that Arthur Smith is a children’s entertainer, Stephen Fry is a Royal Biographer, and Newsnight presenter Kirsty Wark is a homeless waif who sets fire to telephone boxes.

But just as he’s adjusting to the situation and warming to his new family, his life is up-ended once more when he learns of the existence of his evil doppelganger, who is wreaking havoc in both universes.

With events spiralling out of control, Robin gets set for divorce from the woman he never married in the first place, is accused of murder and faces the death penalty, and discovers the awful truth about Operation War of the Worlds. And as the two universes collide, vortices open and temporal and spatial anomalies multiply, Robin begins to suspect he may be personally responsible for the whole mess. Can he solve the riddle and save the world, or is he just too grumpy to try?

Written by Tony Bagley
Produced by Claire Jones
Theme music: ‘I'll Never Get Out of This World Alive’, written and sung by Hank Williams