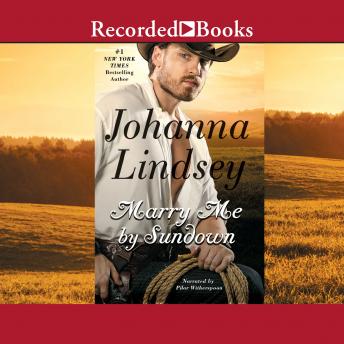 Marry Me By Sundown

#1 New York Times bestselling author Johanna Lindsey takes you on a captivating adventure in 1880s Montana where passions and gold fever run high as an American heiress turns to a rugged mountain man to help her locate her father's fortune. Summoned back to Philadelphia from the social whirl in London, Violet Mitchell never expected to find her brothers living on the edge of financial ruin while their father seeks new wealth in Montana's gold fields. With the family's home and social standing at risk, Violet makes a drastic decision. Morgan Callahan rode away from his family's cattle ranch to make his own fortune. Now as he finishes exploiting a mother lode of silver, a young woman claiming to be his late partner's daughter turns up wanting to be taken to her father's mine. Suspecting that the pretty schemer works for the mining outfit that is trying to steal his land, he has no qualms about snatching her and holding her at his camp where she can do no harm. Morgan underestimated the new thorn in his side. Determined to claim what rightfully belongs to her family, Violet summons up the courage, grit, and spunk to cope with the hazards and discomforts of an untamed land and the disturbingly masculine stranger who holds her fate in his hands. But an error of judgment brings down a hailstorm of calamity and danger that upends her plans and deepens her bond to a man who is not the brilliant match a lady wishes to make but could be all that a strong, passionate woman desires.

Marry Me By Sundown