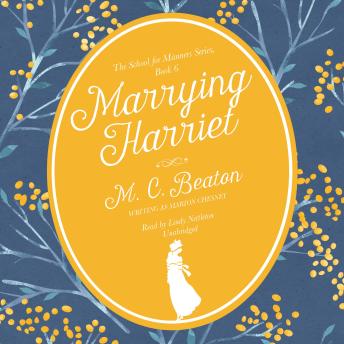 #6 of The School for Manners Series

Miss Harriet Brown, daughter of a Methodist minister, is the embodiment of propriety and Christian charity—too much so, perhaps, for her own good. The virtues Harriet possesses are far from fashionable, but Amy and Effy Tribble, chaperones-for-hire, feel confident that their new charge will attract a worthy vicar or two before the end of the season. First, though, they must vanquish confirmed rake and gambler Lord Charles Marsham, catch though he is, who seems perversely determined to woo Harriet. Little do the Tribbles know that Harriet has her own reasons for encouraging her unlikely suitor—and that they involve enlisting Lord Marsham’s help in marrying off the Tribbles! Gentle hints and flirtatious glances are not enough, Harriet fears, to bring Mr. Haddon and Mr. Randolph, the sisters’ longtime friends and admirers, up to the mark. No, a man’s touch is needed. Meanwhile, Lord Marsham seems to think that it’s Harriet who needs a man’s touch, while more nefarious plans are being brewed for the Tribbles’ future, as old acquaintances—and enemies—gather round in this rousing finale to Marion Chesney’s most delightful series.