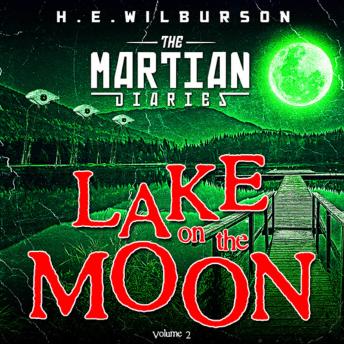 The Martian Diaries: Vol.2 Lake On The Moon: A sequel to The War Of The Worlds

A New Martian Menace Invades Planet Earth as The War Of The Worlds Continues!

What lies concealed inside the Martian Red Weed and what is the secret of the lake on the moon? When the first Martian cylinder crash lands in England, Ogilvy the astronomer barely survives the deadly heat ray from the attack by aliens. He then accidentally stumbles upon the truth about the Red Weed and sends vital evidence to scientists in France on board HMS Thunder Child, but the ship is attacked by a Martian tripod.

Years later in 1919, in the aftermath of World War 1 and Spanish influenza, a sinister plague emerges on Earth from the long forgotten Red Weed, and it threatens all life on our planet with global extinction.

Ogilvy suggests a daring and risky plan to combat the devastating alien menace, involving alternate history timelines. He persuades other original War Of The Worlds characters to participate, but how on earth can they locate the secret weapon hidden by the Martians at the lake on the moon?

Don't miss volume 2 of this award-winning continuation of The War Of The Worlds, featuring original music and immersive sound effects. Get your copy today!

'I sat spellbound while listening to this....as I've always been convinced nobody could ever out-rank the original War of the Worlds by H.G. Wells, but he has succeeded in giving us this astonishing follow-up.' Breakaway Reviews

'The storyline is mesmerizing, and Mr Wilburson has done a magnificent job of melding his story with the original War of the Worlds.' Readers Favorite Reviews

'I am in awe. I finished the audiobook an emotional wreck, especially after the epilogue and cannot wait for episode three, Gateway to Mars.' Goodreads reviewer

Martian Diaries: Vol.2 Lake On The Moon: A sequel to The War Of The Worlds