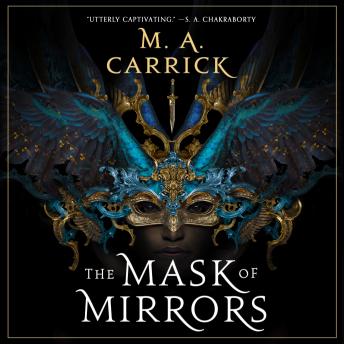 The Mask of Mirrors

Ren is a liar and a thief, a pattern-reader and a daughter of no clan. Raised in the slums of Nadežra, she fled that world to save her sister. Now, she has returned with one goal: to trick her way into a noble house, securing her fortune and her sister’s future.

But in the city of dreams, her masquerade is just one of many. Enigmatic crime lord Derossi Vargo, stony captain of the guard Grey Serrado, dashing heir Leato Traementis, and the legendary vigilante known as the Rook all have secrets that could unravel her own.

And as corrupt nightmare magic begins to weave its way through the city of dreams, the poisonous feuds of its aristocrats and the shadowy dangers of its impoverished underbelly become tangled—with Ren at their heart.

"Lush, engrossing, and full of mystery and dark magic" (BookPage), The Mask of Mirrors is the unmissable start to the Rook & Rose trilogy, a dazzling fantasy adventure by Marie Brennan and Alyc Helms, writing together as M. A. Carrick.

Praise for the Rook & Rose trilogy:

"For those who like their revenge plots served with the intrigue of The Goblin Emperor, the colonial conflict of The City of Brass, the panache of Swordspoint, and the richly detailed settings of Guy Gavriel Kay."—Booklist (starred review)

"Utterly captivating." —S. A. Chakraborty, author of The City of Brass

"This novel will catch hold of your dreams and keep you from sleeping." —Mary Robinette Kowal, author of The Calculating Stars

"Wonderfully immersive—I was unable to put it down." —Andrea Stewart, author of The Bone Shard Daughter

I didn't have time to reread the book when I got the sequel, so I decided to listen to the audiobook to quickly refresh my memory. I'm not entirely convinced this version was actually any faster than reading it myself, but at least I was able to listen to it while working instead of spending all my free time reading something I already half remembered. No music, sound effects or ambience here, but I don't require it to rate an audiobook highly. I was Just disappointed, as the authors have a lot of mood music on their website relating to particular characters and scenes, a full playlist for each book. The audio quality isn't awful for a single narrator, but the accents were incredibly distracting, and sometimes blatantly incorrect. While some things may be personal preference (I'd expected the Liganti accents to be more similar to French, and a Romani accent instead of a Russian one for the Nadezrans, as well as some words and names to be pronounced differently), the narrator has an American accent and uses that for narration and thoughts despite the main character switching between a British and Russian accent for every spoken line. Her Russian accent sounds pretty stereotypical and overdone in a very fake way, too, which is constantly on display for half the cast through the entire story. She also gives random other characters awful American accents, having one high class woman sound like a 90s valley girl from a second-rate teen drama, and often fails to keep the accents steady for emotional scenes or longer dialogue. If I hadn't listened to this on a free trial, I would have demanded a full refund the second Silibat was introduced sounding like a bad Heathers reject. The narrator either accidentally switched to the wrong accent in a few scenes or muddled them enough that it sounded like she did. I admit it's personal preference, but I thought she also spoke too slowly in a number of areas, and both the accents and pronunciation took me out of the story fairly often in places that didn't bother me reading the book normally. Furthermore, this narrator fails to handle any male dialogue gracefully, as she isn't very good at providing different voices or pitches to the many side characters of the broader cast. Almost every man is all but whispered in an attempt to speak in a lower or huskier voice, which not only caused me to need to rewind it just to hear what was going on frequently, but also makes all men she does this for sound the same, which makes the scenes with groups of characters confusing. Other men are just voiced through her usual narration style, which can make the distinction between dialogue and everything else confusing instead of the previous problem. While the accents grated on my nerves, these issues genuinely made it difficult to hear and understand the book, and in my opinion should have been corrected (either by recording better lines or through leveling the audio) to not have huge drops in volume in the middle of otherwise loud dialogue. Overall, while I doubt they'll switch to a different voice actor for the sequel, I won't be listing to it aloud if it uses the same woman, and I had a lot of complaints (obviously). The audiobook failed to make certain scenes interesting or emotional, and often chose tones or enunciations that made what had originally seemed clever, intentional repetition just sound annoyingly repetitive, like a mistake. While I didn't think the book itself was perfect originally, I was interested enough to get the sequel and liked much of the worldbuilding, especially the Zorro-esque flair of the Rook. I'll just be sticking to the print version of this series in the future.