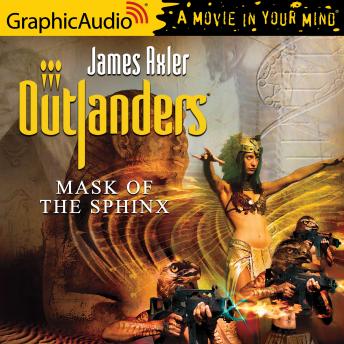 Mask of the Sphinx [Dramatized Adaptation]

The nine barons of post-nuclear America are succumbing to the tides of insurrection, a war that threatens to bring about the extinction of not only the weakening oligarchy, but the entire hybrid race. As the battle for power and territory rages on between the weary barons and the increasingly powerful and dangerous Imperator, the rebels of Cerberus press on, driven by the hope that humanity will someday have the choice that only freedom from enslavement can allow: a chance to reclaim the planet. Hidden deep within the canyons of the California desert, the city-kingdom of Aten thrives, resplendent with the glory and prosperity of ancient Egypt. Harnessing the secrets of selective mutation, the psionic abilities of its nobility and benevolent rule of a fair Queen, the metropolis remains insular, but safe. Now Aten faces a desperate fight for survival-a battle that will lure Kane and his companions into the conflict, where a deadly alliance with the Imperator to hunt out the dark forces of treason could put the Cerberus warriors one step closer to their goal of saving humanity... or damn them and their dreams, to the desert dust.

Mask of the Sphinx [Dramatized Adaptation]