The Master Of Verona: A Novel Of Renaissance Italy 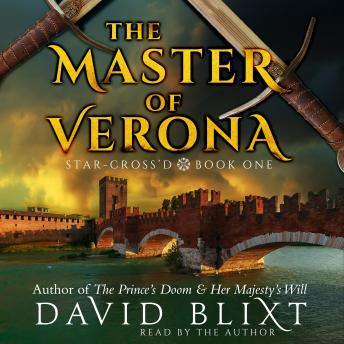 In 1314, seventeen-year-old Pietro Alighieri travels to Verona with his father, the infamous poet Dante, at the invitation of its leader, the legendary Cangrande della Scala. Cangrande is everything a man should be: Daring. Charming. Ruthless. To Pietro, he is the ideal Renaissance prince - until Pietro discovers a secret that could be Cangrande’s undoing.

A sneak attack from Padua draws Pietro into a web of intrigue involving Cangrande, his sister Katerina, and a star-crossed child. He finds refuge in his friendship with Mariotto Montecchio and Antonio Capulletto, but is torn when the pair feud over a woman. Pietro must navigate a rivalry that severs a friendship, divides a city, and sparks a feud that will produce Shakespeare’s famous star-crossed lovers, Romeo and Juliet.

Inspired by the plays of Shakespeare, the poetry of Dante, and the events of history, The Master Of Verona is a sweeping novel of Renaissance Italy. Filled with swashbuckling adventure and unrequited love, this epic journey recalls the best of Bernard Cornwell, Sharon Kay Penman, and Dorothy Dunnett.

'A delightful romp through the backstory of 'Romeo & Juliet.' - Chicago Sun-Times

'Be prepared to burn the midnight oil. It's well worth it.' - Historical Novel Society

'David Blixt bursts onto the historical fiction scene with this masterful tale of adventure, love, and intrigue. This is high adventure at its best.' - C.W. Gortner, author of The Last Queen

Master Of Verona: A Novel Of Renaissance Italy