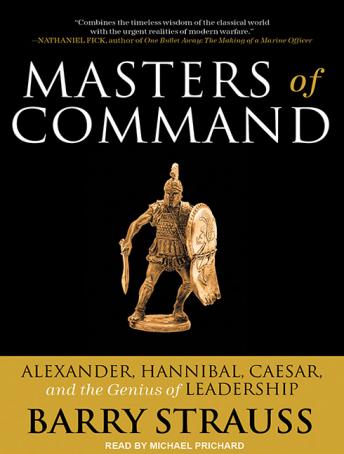 Masters of Command: Alexander, Hannibal, Caesar, and the Genius of Leadership

Alexander, Hannibal, Caesar: Each was a master of war. Each had to look beyond the battlefield to decide whom to fight and why; to know what victory was and when to end the war; to determine how to bring stability to the lands he conquered. Alexander, Hannibal, and Caesar had to be not only generals but statesmen. And yet each was a battlefield commander, a strategist, a leader of men-in short, a warrior.Tactics change, weapons change, but the ultimate purpose of war remains much the same through the centuries, and a great warrior must know how to measure success. Publishers Weekly said: 'No one presents the military history of the ancient world with greater insight and panache than Barry Strauss,' and in Masters of Command he shows what these three great commanders can teach us today about ambition, leadership, branding, and more.Understanding where Alexander, Hannibal, and Caesar succeeded and failed can serve anyone who thinks strategically-whether in business or elsewhere-to analyze his or her actions. Masters of Command is a guidebook for the battlefield and the board room alike.

Masters of Command: Alexander, Hannibal, Caesar, and the Genius of Leadership