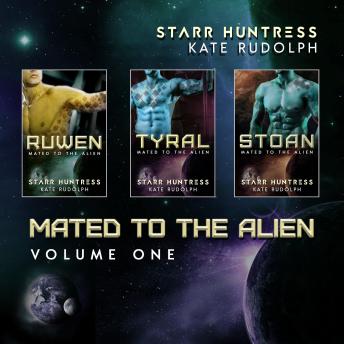 Part of Mated to the Alien

Detyens are doomed to die at the age of thirty if they don't find their fated mates in time.

This bundle brings together the first three books in the Mated to the Alien series. Listen as Ruwen, Tyral, and Stoan find human mates and a new hope for their dying race. This series will bring you fated mates, steamy alphas, and plenty of space adventures.

Ruwen NaNaran knows he's a goner. His alien species is cursed by a deadly genetic quirk and he'll be dead before the month is out, unless he finds his denya. She's the only woman in the universe who can save him. It's too bad that most Detyen women are dead.

From the moment he sees her, Ty knows Dorsey is his mate. But even if they can defeat the pirates, there are worse enemies after both of them. A man living on borrowed time doesn't care about making enemies, but given the chance he will fight with everything he has to ensure his mate's survival... and his own.

Reina Draven almost lost everything at the hands of a warlord's ambition. As she's pulled into a world of danger and intrigue, her only stable force is the closed off blue alien assigned to be her partner on a mission she's been drafted into undertaking. Though the flame of desire sparks hot between them, she doesn't know if she's ready for romance, and he seems determined to keep away from her.