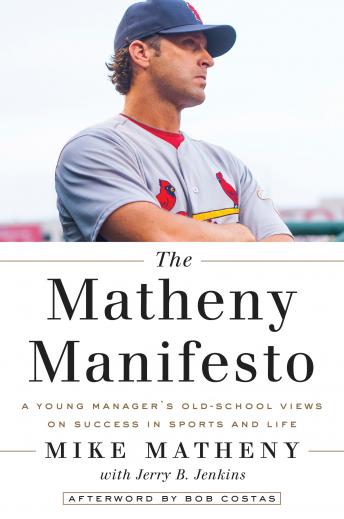 The Matheny Manifesto: A Young Manager's Old-School Views on Success in Sports and Life

St. Louis Cardinals manager Mike Matheny's New York Times bestselling manifesto about what parents, coaches, and athletes get wrong about sports; what we can do better; and how sports can teach eight keys to success in sports and life.

Mike Matheny was just forty-one, without professional managerial experience and looking for a next step after a successful career as a Major League catcher, when he succeeded the legendary Tony La Russa as manager of the St. Louis Cardinals in 2012. While Matheny has enjoyed immediate success, leading the Cards to the postseason four times in his first four years−a Major League record−people have noticed something else about his life, something not measured in day-to-day results. Instead, it’s based on a frankly worded letter he wrote to the parents of a Little League team he coached, a cry for change that became an Internet sensation and eventually a “manifesto.”

The tough-love philosophy Matheny expressed in the letter contained his throwback beliefs that authority should be respected, discipline and hard work rewarded, spiritual faith cultivated, family made a priority, and humility considered a virtue. In The Matheny Manifesto, he builds on his original letter by first diagnosing the problem at the heart of youth sports−it starts with parents and coaches−and then by offering a hopeful path forward. Along the way, he uses stories from his small-town childhood as well as his career as a player, coach, and manager to explore eight keys to success: leadership, confidence, teamwork, faith, class, character, toughness, and humility.

From “The Coach Is Always Right, Even When He’s Wrong” to “Let Your Catcher Call the Game,” Matheny’s old-school advice might not always be popular or politically correct, but it works. His entertaining and deeply inspirational book will not only resonate with parents, coaches, and athletes, it will also be a powerful reminder, from one of the most successful new managers in the game, of what sports can teach us all about winning on the field and in life.

Matheny Manifesto: A Young Manager's Old-School Views on Success in Sports and Life

by Mike Matheny, Jerry B. Jenkins