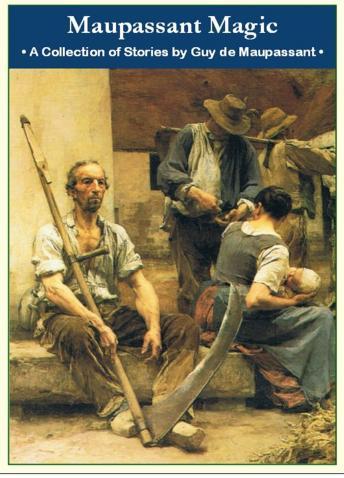 Possessed of a... voracious sexual appetite, bitter and frequently disillusioned by the history of his country and the foibles of its people is not a description that does justice to the tortured soul that was Guy de Maupassant. He was also a compassionate and deeply patriotic man, volunteering to fight for his country in the Franco-Prussian War at the age of 20 and again saw action reporting on the French campaign in Tunisia in 1881. Unfortunately these irreconcilable internal conflicts eventually led to syphilis, hallucination, attempted suicide, madness and an early death in an asylum at the age of 43-most of which horror was self predicted in ‘The Horla’. During his short life, however, he wrote over 300 short stories-as well as 6 novels and the vast canon of his original and unusual tales placed him at the pinnacle of world literature as the master storyteller. The stories presented here are; A Piece of String The Chairmender The Diamond Necklace The Little Soldiers Two Fishermen Boule de Suif (Fatball) Madame Tellier’s House The Dowry A Coward The Horla

My first-but not I hope my last-acquaintance with this eclectic publisher of classic stories packaged, presented and read in an unashamedly old- fashioned three Rs way, i.e. Royal Academy Covers, romantic music, rounded vowels. De Maupassant wrote three novels and more than three hundred stories. These ten represent his range rather than his genius, but if like the desert castaway I could take only one, it would be “Boule de Suif” [Fat Ball] the best short story ever written in any language. Ten refugees from Rouen are fleeing the Prussian occupation of France in 1870- six self styled toffs, two nuns, a communist and a patriotic putain. .Greed, hypocrisy, pride- De Maupassants’ take on human frailty is merciless. And his spare descriptions of the snow covered landscape and its occupants, including a certain young Prussian officer, are simply dazzling. This is magic for sure