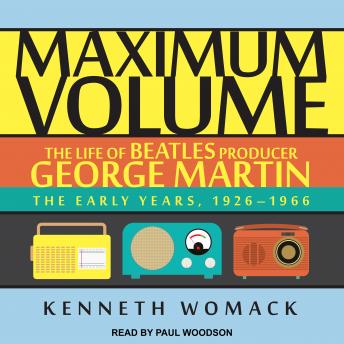 Maximum Volume offers a glimpse into the mind, the music, and the man behind the sound of the Beatles. George Martin's working-class childhood and musical influences profoundly shaped his early career in the BBC's Classical Music department and as head of the EMI Group's Parlophone Records. Out of them flowed the genius behind his seven years producing the Beatles' incredible body of work, including such albums as Rubber Soul, Revolver, Sgt. Pepper's Lonely Hearts Club Band, and Abbey Road.

The first book of two, Maximum Volume traces Martin's early years as a scratch pianist, his life in the Fleet Air Arm during the Second World War, and his groundbreaking work as the head of Parlophone Records, when Martin saved the company from ruin after making his name as a producer of comedy recordings. In its most dramatic moments, Maximum Volume narrates the story of Martin's unlikely discovery of the Beatles and his painstaking efforts to prepare their newfangled sound for the British music marketplace. As the story unfolds, Martin and the band craft numerous number-one hits, progressing toward the landmark album Rubber Soul-all of which bear Martin's unmistakable musical signature.