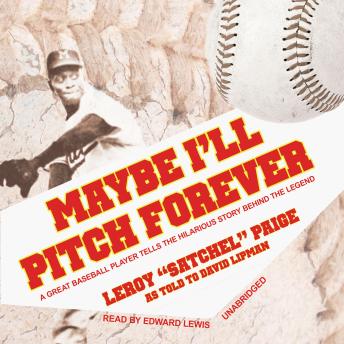 Leroy "Satchel" Paige was forty-two years old when hebecame the first African American pitcher in the American League in 1948.Although he was the oldest rookie around, he had already become a legend. Fortwenty-two years, beginning in 1926, Paige dazzled fans with his performance inthe Negro Major Leagues. He outlasted everyone by playing professionalbaseball, both in and out of the majors, until 1965. Struggle-against earlypoverty and racial discrimination-is an integral part of Paige's story, as arehis fast living and humorous point of view. His immortal advice-one of the mostfamous quotes in baseball-was, "Don't look back. Something might be gaining onyou."
Maybe I'll Pitch Forever is Paige's autobiography, astold to David Lipman.

This title is due for release on June 17, 2009
We'll send you an email as soon as it is available!