Maybe the Horse Will Talk 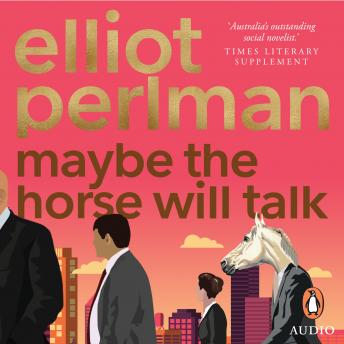 Stephen Maserov has problems. A onetime teacher, married to fellow teacher Eleanor, he has retrained and is now a second-year lawyer working at mega-firm Freely Savage Carter Blanche. Despite toiling around the clock to make budget, he's in imminent danger of being downsized. And to make things worse, Eleanor, sick of single-parenting their two young children thanks to Stephen's relentless work schedule, has asked him to move out.

To keep the job he hates, pay the mortgage and salvage his marriage, he will have to do something strikingly daring, something he never thought himself capable of. But if he's not careful, it might be the last job he ever has.

Warm, dramatic, and at times laugh-out-loud funny, with the narrative pull of a thriller, Maybe the Horse Will Talk is a love story, a reflection on contemporary marriage, and on friendship. It is also an unflinching examination of sexual harassment in the workplace and an expos� of corporate corruption that taps directly into the pulse of our times.

'Australia's outstanding social novelist' (Times Literary Supplement), Elliot Perlman '...has many things working in his favor as a novelist: curiosity, erudition, daring and a gift for seducing readers into going along with him for the ride. He'll get you where you want to go.' (Washington Post)

Maybe the Horse Will Talk