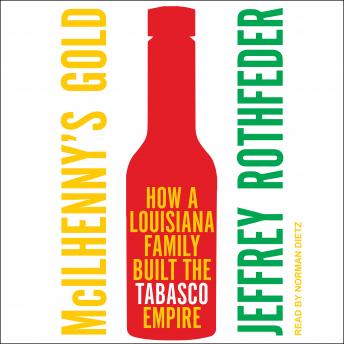 McIlhenny's Gold: How a Louisiana Family Built the Tabasco Empire

After the Civil War ended, Edmund McIlhenny, an ambitious and tenacious Louisiana businessman, found himself with few prospects. The South's economy in ruins and his millions of dollars in Confederacy currency worthless, he had no choice but to return with his wife, Mary, to her family home in Avery Island, a former sugar plantation destroyed by Union soldiers. To McIlhenny's surprise, however, the hot peppers he had planted before being forced off the island had flourished. Desperate for money, he chopped up the peppers, combined them with salt and vinegar, and produced the first batch of hot pepper sauce. He called it Tabasco.

Former BusinessWeek editor Jeffrey Rothfeder tells how, from a simple idea-the outgrowth of three peppers planted on an isolated island on the Gulf of Mexico-a secretive family business emerged that would produce one of the best-known brands in the world. In short order, McIlhenny's descendants would turn Tabasco into a gold mine, making it as ubiquitous as Coke, Kodak, and Kleenex: an icon of pop culture. The McIlhenny Company, still run by a family of matchless characters who believe in a rigid code of family loyalty, clings to tradition and the old ways of doing business.

McIlhenny's Gold: How a Louisiana Family Built the Tabasco Empire