The Measure of a Man 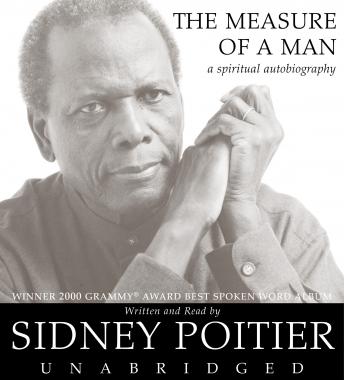 In this luminous memoir, a true American icon looks back on his celebrated life and career. His body of work is arguably the most morally significant in cinematic history, and the power and influence of that work are indicative of the character of the man behind the many storied roles. Sidney Poitier here explores these elements of character and personal values to take his own measure: as a man, as a husband and a father, and as an actor.

Poitier credits his parents and his childhood on tiny Cat Island in the Bahamas for equipping him with the unflinching sense of right and wrong and of self-worth that he has never surrendered and that have dramatically shaped his world. Without television, radio, and material distractions to obscure what matters most, he could enjoy the simple things, endure the long commitments, and find true meaning in his life.

Poitier was uncompromising as he pursued a personal and public life that would honor his upbringing and the invaluable legacy of his parents. Just a few years after his introduction to indoor plumbing and the automobile, Poitier broke racial barrier after racial barrier to launch a pioneering acting career. Committed to the notion that what one does for a living articulates who one is, Poitier played only forceful and affecting characters who said something positive, useful, and lasting about the human condition.

Here is Poitier's own introspective look at what has informed his performances and his life. Poitier explores the nature of sacrifice and commitment, price and humility, rage and forgiveness, and paying the price for artistic integrity. What emerges is a picture of a man in the face of limits - his own and the world's. A triumph of the spirit, The Measure of a Man captures the essential Poitier.

Measure of a Man

This title is due for release on January 26, 2007
We'll send you an email as soon as it is available!