A Measureless Peril: America in the Fight for the Atlantic, the Longest 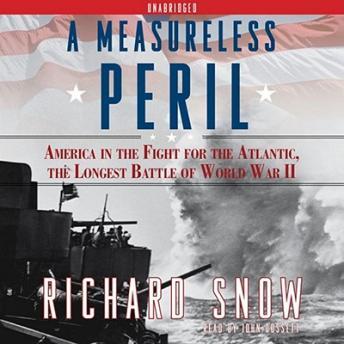 An exciting history told with a novelist's eye and filled with intimate details of the longest and largest battle of WWII—the fight for the Atlantic Ocean.

Of all the threats that faced his country in World War II, Winston Churchill said, just one really scared him—what he called the 'measureless peril' of the German U-boat campaign.

In that global conflagration, only one battle—the struggle for the Atlantic—lasted from the very first hours of the conflict to its final day. Hitler knew that victory depended on controlling the sea-lanes where American food and fuel and weapons flowed to the Allies. At the start, U-boats patrolled a few miles off the eastern seaboard, savagely attacking scores of defenseless passenger ships and merchant vessels while hastily converted American cabin cruisers and fishing boats vainly tried to stop them. Before long, though, the United States was ramping up what would be the greatest production of naval vessels the world had ever known.

Then the battle became a thrilling cat-and-mouse game between the quickly built U.S. warships and the ever-more cunning and lethal U-boats. The historian Richard Snow captures all the drama of the merciless contest at every level, from the doomed sailors on an American freighter defying a German cruiser, to the amazing Allied attempts to break the German naval codes, to Winston Churchill pressing Franklin Roosevelt to join the war months before Pearl Harbor (and FDR’s shrewd attempts to fight the battle alongside Britain while still appearing to keep out of it).

Inspired by the collection of letters that his father sent his mother from the destroyer escort he served aboard, Snow brings to life the longest continuous battle in modern times.

With its vibrant prose and fast-paced action, A Measureless Peril is an immensely satisfying account that belongs on the small shelf of the finest histories ever written about World War II.

Measureless Peril: America in the Fight for the Atlantic, the Longest