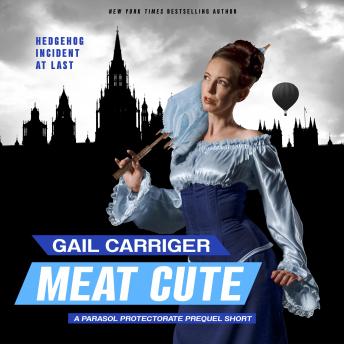 From the comedic mind of New York Times bestseller Gail Carriger comes the much requested prequel short story to Soulless. Narrated by the wonderful Emma Newman!

Alexia Tarabotti attends what appears to be a very dull London party, until the new werewolf Alpha turns up, is unconscionably rude to her, and sits on a hedgehog.

Look out for cheeky appearances from other much beloved characters, not to mention the strategic application of a certain wicker chicken.

Alexia has been described as Buffy the Vampire Slayer meets Jane Austen!

A Note On Chronology

Set in the spring of 1872 this story occurs just prior to events chronicled in The Parasol Protectorate series (featuring Alexia and Conall) and after those in Defy or Defend.

This is a quick listen at 9000 words (about 15 printed pages) available in print only as part of Fan Service (collected Supernatural Society omnibus). It is best enjoyed if you are already familiar with Gail Carriger's gaslight universe and comedy of manners style, as it was written specifically with her fans in mind.

Also by Gail Carriger set in the Parasolverse