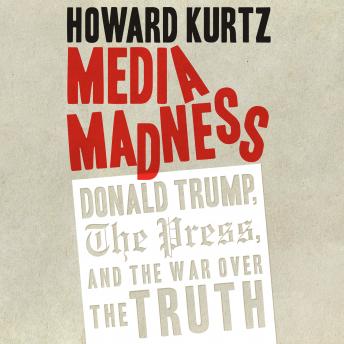 Media Madness: Donald Trump, the Press, and the War over the Truth

According to the media, Donald Trump could never become president. Now many are on a mission to prove he shouldn’t be president. The Trump administration and the press are at war—and as in any war, the first casualty has been truth. Bestselling author Howard Kurtz, host of Fox News’s Media Buzz and former Washington Post columnist, offers a stunning exposé of how supposedly objective journalists, alarmed by Trump’s success, have moved into the opposing camp. Kurtz’s exclusive, in-depth, behind-the-scenes interviews with reporters, anchors, and insiders within the Trump White House reveal the unprecedented hostility between the media and the president they cover. In Media Madness, you’ll learn:
• Why White House strategist Steve Bannon told Trump he is in danger of being impeached
• How the love-hate relationship between the president and Morning Joe hosts—Joe Scarborough and Mika Brzezinski—turned entirely to hate
• How Kellyanne Conway felt betrayed by journalists who befriended her—and how she fought back
• How elite, mainstream news reporters—named and quoted—openly express their blatant contempt for Trump
• How Bannon tried to block short-lived Communications Director Anthony Scaramucci—and why Trump soured on him
• How Ivanka and Jared Kushner aren’t the liberals the pundits want them to be—and why Trump tried to discourage them from joining the White House
• Why Trump believes some journalists harbor hatred for him—and how some liberals despise his voters
• How Trump is a far more pragmatic politician than the press often acknowledges (and how the press dismisses his flip-flops when he flops their way)
• What Trump got wrong about Charlottesville—and how Steve Bannon predicted the debacle
• How the media consistently overreached on the Russian “collusion” scandal
• Why Trump actually likes journalists, secretly meets with them, and allows the press unprecedented access
• Why Reince Priebus couldn’t do his job—and the real reason he left the White House
• How Sean Spicer privately berated journalists for bad reporting—and why he and Kellyanne Conway were relentlessly attacked by the media
Never before has there been such an eye-opening, shocking look at what the White House and the media think about each other. It’s not pretty. But it also makes for the most important political book of the year.

This title is due for release on January 29, 2018
We'll send you an email as soon as it is available!