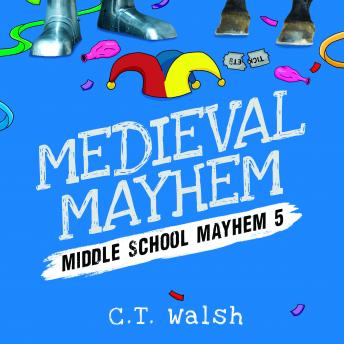 What happens when you combine middle school with medieval times? Medieval Mayhem happens, that's what! Middle School Mayhem: Medieval Mayhem is the fifth installment of a planned twelve-book series. And it just could be the best and funniest adventure yet!

Austin Davenport is back as he travels back in time to battle his timeless nemesises for honor and glory. Well, sort of.

When Austin is embarrassed by baby-faced villain, Randy Warblemacher, in front of the whole school, he decides to drop the gauntlet! And the upcoming Medieval Renaissance Fair is the perfect place for an epic showdown. The only problem? Your favorite nerd needs to transform into a knight!

It's a game of thrones throw-down as all of Cherry Avenue Middle School's key players jostle and joust for power, fueled by greed, revenge, and some tasty roasted turkey legs.

How can you pass up the prospect of epic sword battles, knightly chivalry, chilling betrayals, and a prison break? Oh, and there might also be a dragon and a kerfuffle with some less-than-chivalrous knights from the underworld. So, a regular ho-hum story… People should use the word kerfuffle more, don't you think?

Join Austin and his crew on this legendary quest as they battle and 'Huzzah!' their way through danger and those looking to destroy them…too dark? Well, it's an epic conflict between good and evil. What did you expect? Rainbows and unicorns? I mean, honestly…