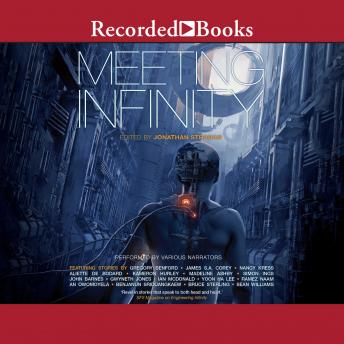 THE FUTURE IS OURSELVES The world is rapidly changing. We surf future-shock every day, as the progress of technology races ever on. Increasingly we are asking: how do we change to live in the world to come? Whether it's climate change, inundated coastlines and drowned cities; the cramped confines of a tin can hurtling through space to the outer reaches of our Solar System; or the rush of being uploaded into cyberspace, our minds and bodies are going to have to drastically alter. Multi-award winning editor Jonathan Strahan brings us another incredible volume in his much praised science-fiction anthology series, featuring stories by Madeline Ashby, John Barnes, James S.A. Corey, Gregory Benford, Benjanun Sriduangkaew, Simon Ings, Kameron Hurley, Nancy Kress, Gwyneth Jones, Yoon Ha Lee, Bruce Sterling, Sean Williams, Aliette de Bodard, Ramez Naam, An Owomoyela and Ian McDonald. Author bio: Jonathan Strahan is an editor and anthologist. He coedited The Year's Best Australian Science Fiction and Fantasy anthology series in 1997 and 1998. He is also the reviews editor of Locus. He lives in Perth, Western Australia, with his wife and their two daughters.