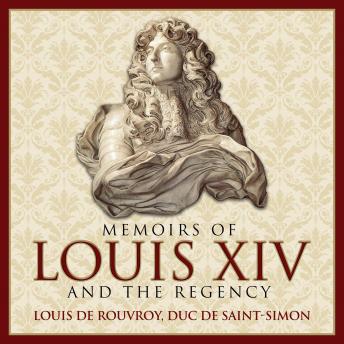 Memoirs Louis XIV and the Regency

Duc de Louis de Rouvroy Saint-Simon (1675-1755) was a French soldier, diplomat and noted diarist. A French courtier during the 18th century, today he's best known for the comprehensive multi-volume memoirs, which depict life in France at the time. He was an indefatigable writer, and he began very early to record all the gossip he collected, all his interminable legal disputes over precedence, and a vast mass of unclassified material. He is petty, unjust to private enemies and to those who espoused public views contrary to his as well as being an incessant gossip. Yet he shows a great skill for narrative and for character-drawing; he has been compared to Tacitus, and to historians such as Livy.He had a profound influence on writers like Tolstoy, Barbey d' Aurevilly, Flaubert, Valle-Inclán, Proust, Mujica Láinez, and many others.

Memoirs Louis XIV and the Regency