The Memoirs of Berlioz: Including His Travels in Italy, Germany,Russia, and England, 1803-1865 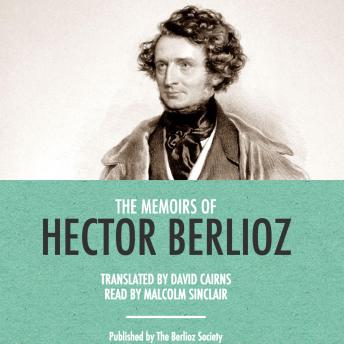 Hector Berlioz was one of the most significant artistic figures of the nineteenth century. Intended for medicine, he turned instead to music and became one of its most original composers. His first major work, the semi-autobiographical Symphonie Fantastique, revolutionised the sound of the orchestra and its use in storytelling. Unhappy with the quality of performance of his works he took up the baton himself and became a great conductor, celebrated across Europe and in Russia. Requiring large numbers of performers, his works were expensive to perform and he was condemned (as he saw it) to earn extra money from writing – at which he also excelled.

His was a passionate life driven by love: of music but also of three women in particular. First came the Irish actress Harriet Smithson, then the singer Marie Recio and in his final years he communicated with Estelle Fournier, a woman he had been infatuated with when they were both children. His experience of the artistic politics of the Paris music scene, the itinerant life of the guest conductor and the upheavals in the world around him called out to be told – and fortunately his masterly use of the written word enabled him to do so with an irresistible combination of exuberance, humour and indignation. His portraits of friends, enemies and organisations are perfectly drawn, taking us back to his time but also allowing us to recognise parallels with our world now.

The translation of the Memoirs is the definitive version by David Cairns, whose two-volume biography of Berlioz won many prizes, and captures to perfection the dazzling prose of the original. It is read by the distinguished actor and Berlioz enthusiast Malcolm Sinclair, who brings the man’s personality and style brilliantly to life.

Memoirs of Berlioz: Including His Travels in Italy, Germany,Russia, and England, 1803-1865