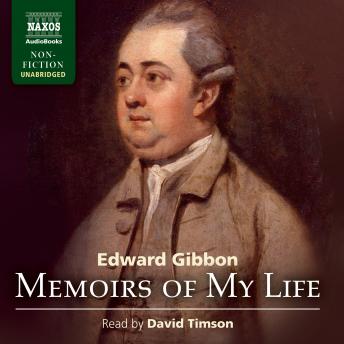 Memoirs of My Life

Edward Gibbon (1737-1794) was an English historian and Member of Parliament known for his monumental series The Decline and Fall of The Roman Empire, which chronicled the dissipation of the Roman dynasties in a lofty, majestic style unique to its author. Memoirs of My Life, published posthumously in 1796, wholly unveils the character of the world’s greatest historian in full candour and openness. We follow him from birth, through to his education at Oxford, to his time in Switzerland where he met Voltaire and fell in love with a Swiss girl. We accompany him on his travels through France and Lausanne, leading on to his eventual arrival in Rome, where he conceived his epic Decline and Fall. Gibbon’s Memoirs is a portrait of a rich and productive life and offers a compelling insight into a towering figure; it is essential listening for anyone interested in great literature.

Memoirs of My Life