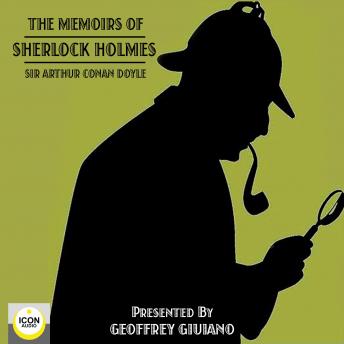 Sherlock Holmes, a fictional character of the late 19th and early 20th century created by Scottish author and physician Sir Arthur Conan Doyle, is a brilliant London-based 'consulting detective' famous for his intellectual prowess and renowned for his enormous scope of observation, his astute logical reasoning and forensic science skills in solving difficult crimes. The Memoirs of Sherlock Holmes is a collection of Sherlock Holmes mysteries, including The Final Problem in which Holmes confronts his arch-nemesis Professor Moriarty, originally published in 1894, which are preceded by The Adventures of Sherlock Holmes and followed by The Hound of the Baskervilles
Edited by Macc Kay
Production executive Avalon Giuliano
ICON Intern Eden Giuliano
Music By AudioNautix With Their Kind Permission
©2020 Eden Garret Giuliano (P) Eden Garret Giuliano

This title is due for release on July 6, 2020
We'll send you an email as soon as it is available!